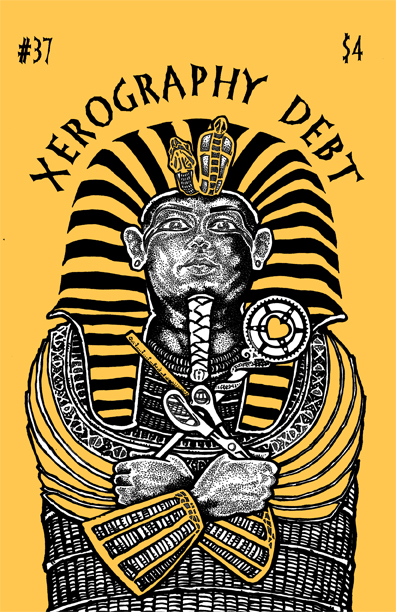 Who and What We Are

Xerography Debt is a review zine for zine readers by zine writers (and readers). It is a hybrid of review zine and personal zine (the ancestor to many blogs). The paper version has been around since 1999. This blog thing is are attempt to bridge the gap between Web 2.0 and Paper 1.0. Print is not dead, but it is becoming more pixelated.

I like to do a little intro to my reviews even thiugh I have nothing to say. But if you live in the US you gotta go vote next Tuesday. Not so much for the Presidential election because quite frankly your one vote really doesn't make much of a difference unless you live in one of the undecided states and that's assuming the whole thing isn't fixed to begin with. But you may have ballot questions and apparently if I vote wrong here in MA. dogs will be abused, potheads will rot in prison and I will get a few extra bucks in my paycheck while schools, hospitals & libraries collpase around me. They sure make it sound important.


BAMBOOZLED: THE JOEY TORREY STORY- “If the police ask for help, just say no! If the FBI comes knockin, do not answer the door! When you read ‘Former boxer Joey Torrey has died’ you can remember ‘Oh snap, I just read his zine‘...I am 47 years old in 2008 and not as quick as I was 20 years ago. I will be assassinated by the hand of someone you read about in this story. Thank you for your time.” Thus concludes the zine BAMBOOZLED, the story of former boxer Joey Torrey. I always enjoy zines by people who are not your typical zinesters and Joey, a former boxer currently in prison for murder, is definitely not a typical zinester. This zine actually featured something you don’t see a lot of in zines and I hadn’t realized I’d been missing- action and adventure. There’s definitely more to the zine than that, but at it’s core this zine has the makings of a good crime novel. Joey is a pretty impressive guy. After getting sent to prison for murder while working for the mob and having the government back out of their promise to get him out by the time he’s 25 he manages to make 6 figures a year while behind bars selling sports memorabilia and even producing a TV show. All the while he’s studying law diligently trying to find a way to get himself released from prison. Which he actually does, but that’s only the beginning of what can only be described as a huge shit storm. He agrees to help the FBI with an investigation on the corruption of boxing (which according to Joey is really, really corrupt. It’s kind of hard to believe that the mainstream media has no idea about this so I can only assume they don’t care) and...well, it ends with the quote I started the review with so you can figure that all does not end well for Joey. The writing is a tad choppy in that 5 years will pass without being noted, but Joey is an interesting guy with a fascinating story to tell. I’m kind of surprised it’s being told in a zine because it has the makings of a best selling book/
64 illustrated pages, 5.5 x 8.5 send $5 to Microcosm Publishing 222 S. Rogers St Bloomington IN. 47404
www.microcosmpublishing.com jessie@microcosmpublishing.com

FRESH BREATH OF MINT #9- I don’t know if this is really a zine, but they sent it to XD so I may as well review it. This is a free magazine produced by Mint Records that you find for free in indy record stores. It’s one of the better free magazines I’ve seen and has some good stuff in here. It also has articles on bands I’ve never beard of and tons of ads for even more bands I’ve never heard of. If nothing else it certainly highlights the fact that there are a lot of bands I’ve never heard of. It also came with a Mint Records Sampler CD that I liked, but I have no idea how you can acquire that. This is worth picking up for free and since it’s free I guess that means this is a good review. In my local record store this is in a little display by the door with all the other free newspapers. I don’t know where they keep in your local store but I bet it’s in roughly the same area.
Mint Records Inc. PO Box 3613, Vancouver BC Canada V6B 3Y6 www.mintrecs.com www,myspace.com/mintrecords

IZZY CHALLENGE #5- Hey, this is pretty cute. It’s a jam comic called “Izzy Tours America” featuring 50 artists from every state in the USA. The originator of this comic, JB White drew Izzy the mouse in 50 different poses and then sent them to one artist in each state to draw a specific scene for Izzy to be participating in. It’s definitely nothing Earth shattering in it’s brilliance, but it’s a fun idea well executed.
16 pages 5.5 x 8.5, e-mail before trading, send $1 to JB Winter PO Box 1814 Columbia, MO 65205 info@JBwinter.com

NUNS I’VE KNOWN- I picked this up at the Boston Zine Fair. It’s always been a goal of mine to review each and every zine I acquire at the fair, but even I know I’ll never do that. Quite frankly it’s an accomplishment if I even read ‘em all. Anyhow, as I read this it occurred to me that never in my life have I heard anyone say anything nice about a nun. Priests certainly get their share of bad publicity, but by the same token at least people recognize the good that some priests do. With nuns people just seem to dislike them. Not for anything illegal or horribly abusive, it just seems like nuns have a casual meanness and cruelty about them. If you really wanna hear some anti-nun talk you should ask my grandmother. She hates ‘em. “Nun is the Loneliest Number” as the Pope once said. At any rate, the author of this zine, Pruella Vulgaris, went to Catholic school and writes this zine about nuns she has known and dealt with. Good stuff. I liked it a lot. Very funny and believe it or not once of the nuns actually seems like a nice woman. The rest of ‘em, though, are typically mean nuns. But they’re still fun to read about.
12 pages, some kinda wacky size. I’d say 5.5 x 5. e mail prunellavulgaris@ymail.com www.myspace.com/prunellavulgaris

I’ll get some more reviews posted here on Saturday.
Posted by Eric Lyden at 1:49 AM

Eric are you still there? Is this the WORLD FAMOUS Eric Lyden who sailed to Hawaii way back when?