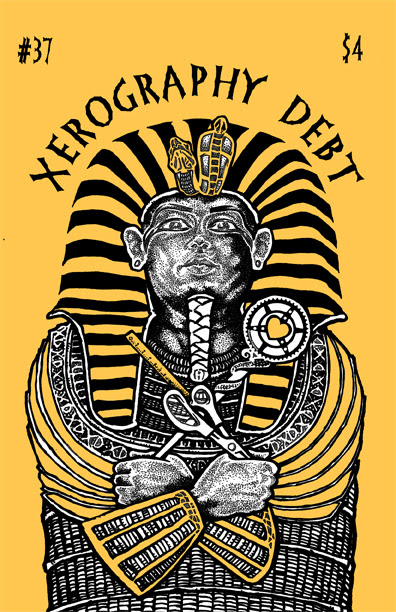 Who and What We Are

Xerography Debt is a review zine for zine readers by zine writers (and readers). It is a hybrid of review zine and personal zine (the ancestor to many blogs). The paper version has been around since 1999. This blog thing is are attempt to bridge the gap between Web 2.0 and Paper 1.0. Print is not dead, but it is becoming more pixelated.

OMG, SO MUCH BROOKLYN! More Brooklyn reviews! Say it with me, people: “The name of this zine is BROOKLYN and that's also what the zine is about, Fred's beloved borough of Brooklyn." If you're new to all this, you should know that  Brooklyn is always a combination of history, photography, and other Brooklyn related things, and it's a long-standing awesome series that's an interesting read even if you don't live there.  I've been reading BROOKLYN for a long, long time, and I enjoy it even though I don't live there and I don't spend much time there. It's a fascinating slice-of-life from someone who clearly loves the history and culture of the place.

I'm always excited to see BROOKLYN in my mailbox, even if I don't get on the reviews right away. Speaking of reviews, #102 -- which landed in my mailbox a while back but I somehow missed reviewing? -- begins with  a piece called "Tic, Tac, Toe --three in a row" about three "unfavorable" reviews of Brooklyn (mostly centering around why Brooklyn, Brooklyn "doesn't really merit a dedicated zine" and -- most weirdly of all -- "Brooklyn holds no interest for people in Brooklyn" (which seemed hilarious and also baffling). "Go figure!" says Fred, and I'm inclined to agree.

Honestly, the best way to experience this zine is to get a subscription. Issues are published quarterly, so getting a whole year's worth gives you a fuller picture of what BROOKLYN is and does. Some issues (like #106) are photography-based, some (like 102 and 105) include one of my favorite features (the Brooklyn lexicon & pronunciation guide, which is always entertaining), and every once in a while you'll get an unexpected treat like a Brooklyn version of a fable ("Hey, Chicken Little, waddaya say?" and "Of Mice And Clocks ... and Brooklyn").  Here's the deal: you don't have to know Brooklyn to enjoy the zine about all things Brooklyn. Fred has a couple of other projects as well, and #106 includes a little information about how they developed (Watch the Closing Doors  is about urban mass transit), including a newer, smaller, and possibly temporary series called Anachronisms, which is mostly a series of musings about odd or out-of-date things that Fred finds interesting (flying cars, "diploma glitches" and typewriters, to name just three which make an appearance in ANACHRONISMS III).

Always, always a fun read worth your time. So, whaddya waitin' for? Read some Brooklyn already!
Posted by anne persand at 10:06 AM